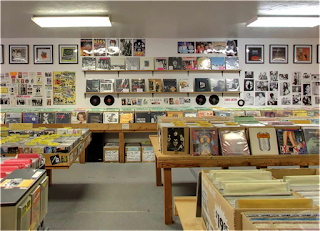 I've been shopping here for 20 years, back when it was a shop in the San Diego State area on El Cajon Boulevard. Back then, it was a sleepy but neat and clean library-like room well-stocked with great records. The person I always dealt with was an old man with a kind heart. I remember how glowingly he told me how important and good two records were, Ray Charles' Modern Sounds in Country and Western and Bob Dylan's Blonde on Blonde. I purchased them from him.

Around the same time, 1997-ish, they opened a second store in Hillcrest, the original has since closed. From the time of opening, the Hillcrest shop has been run by Graham, a real guy. He's got a unique taste, not like the typical know-it-all record store clerk. He's got a refreshing and genuine love of Cliff Richard, some 80s new wave, and more. I've had encounters with him where I felt mutual respect and even friendship, and I've had others where I've unexpectedly annoyed him. But I get it, dealing with people all day long every day is stressful. You gotta love Graham, because he's a San Diego landmark, and he keeps a beautiful boutique full of ultra clean classics, fun curiosities, and a handful of rare gold. Prices are very fair.

Recommendation: Must visit for tasty finds, but keep things light and positive. It's not a place to brag, show off, or challenge. 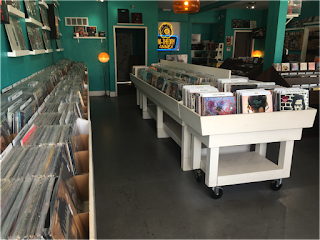 This shop was amazing about 15 years ago when it opened in South Park in the space of a former ice cream parlor. It was a colorful CD-based shop, with a sprinkling of vinyl. Tons of listening stations where you were presented with new progressive albums mainly in the rock genre. You felt the passion in the store, and I only ever had a pleasant experience there. You were turned on to new groups, and seeing live acts was promoted in speech, signage, and fliers. Then they opened a place a block away as well as a Mission Hills location.

And then all of a sudden, the South Park stores closed and ownership changed at the Mission Hills shop, as did the block they were on. The listening stations got fewer, became more stale, and the dominance of CDs shifted to a dominance of vinyl records with a smattering of CDs. Which is fine, because CD purchases are sinking and vinyl rising. But the mood went downhill for years. For maybe a decade, I have had a negative experience every time I've visited. As a customer, I would always feel un-welcome, and the few times I've brought in a box of stuff to sell or trade, they eye you like you stole the stuff. Last time I visited was a little nicer. Hope it keeps getting better. We need more fun shops not less. 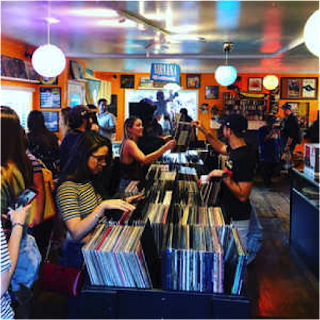 Hallelujah! The people who first started M-Theory and ran it through its best years, had to sell, held a bunch of record events at the Casbah, still do at venues around town, and two years ago opened the sequel shop. And it's even better. With a new focus on vinyl. It's cozier, cuter, got a tiki lounge and a bargain garage. The only grumpy soul here is the dog, poor Maisie.

Here is proof that you should never begrudge a record store high prices. That's because it's a contender for best record shop in this city, and yet it's gone out of business before. This shows that running an awesome record store and staying in business through a crazy economy are two different things. Yes, the prices are high here, but no reason to give them grief. If it's worth it to you, buy it. If not leave it. And if you're budget is close to what they're asking, you might ask them, and if you're a regular customer or are making a very large purchase, they might shave off a little off the total. Being nice is key. Heather and Eric have made yet another space in which you feel at home with the objects, images, and sounds you love. Church for the audiophiles. Good people running it, good people shopping next to you. They just want to move the sounds around. 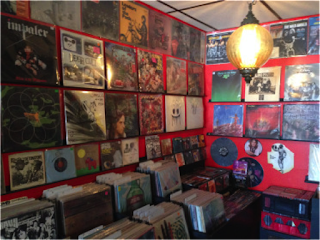 Seems like a record shop that started doing better in skate-boards or something, and so their record selection shrank, and was relegated to one corner. You won't find anything on your wishlist here, but you will find some fun and surprising things, and they will be pretty clean. Prices are cheap. People are nice.

Recommendation: Check it out. Hopefully they will expand their record section.

Let me know if you have any updates, corrections, or disputes in the comments or by email. No intent to harm, but only to inform and spread art and love.