After growing up in southwestern Utah, and later Escondido, California, Joe Yorty served almost 11 years in the U.S. Navy. Now, he has turned his full-time attention to art and has developed a body of work that consists of at least twelve different projects, as well as his thesis exhibition for his Master of Fine Arts (MFA) degree. We focus on four of those projects today, and find each of them immensely thought-provoking and important because of the truth they shed on our American culture as well as because of the questions they bring up about our ideas of art. They bring up a wide range of emotions and are currently drawing increasing interest from art-viewers.
We had the chance, amidst Joe Yorty's preparations for his MFA exhibition, to ask him some questions. Those questions, as well as Yorty's responses, follow below.


Joe Yorty's project Neighbors (2008) consists of photos he took with image-capturing software as he browsed, or "walked", through Google Maps Street View. Each photo focuses on a single individual who is forever trapped on the Google program, or at least until that particular street is updated. Yorty's work serves many purposes and thus feels full of meaning. The first being that he saves the images of the individuals from an almost certain discarding. The second being the idea of how secondary he is to the creating process. The people were there of their own accord, Google snapped the roving pics, and Yorty cut out pieces of those pics, collected them, and presented them together with his name underneath. Described in that strictly physical way, the work might be dismissed as easy or uninspired. But as we've found and documented in previous articles, art-work is not necessarily about taking a long-time or about strenuous effort. Yorty's work broadens our understanding of art to a new level.
First off, we don't know how easy the actual making of this project was. We don't know how he determined what streets to "walk" down, how he determined which people to photograph, nor how he decides on their presentation. Though all of those facets are important, we chose to concentrate today on a sampling of this project as it's found on Yorty's website.
One of the great results of that seeming simplicity of presentation, free of ostentation, is that it reminds us how basic art really is. The fact that this project focuses on photographs that were taken by a corporation-owned camera operated anonymously, maybe even autonomously, reminds us of the public audience that is nudging itself increasingly in front of our lives. That part was not Yorty's doing, but his project does underline it and broadcast it to us in a new light which might bring a deeper understanding of its implications and possible consequences. Beyond this sense of announcing an actuality in our lives, Yorty's work gives artists and art-lovers a sense of rebellious victory for the fact that it takes what is a tool for a dominant corporation and refashions it as his art-piece. We can almost hear the voice that may have inspired Yorty, "I'm not just going to sit back and let you take my picture without my permission. Since that's what you've done, I'm going to take your photos without your permission, and I'm going to present them as my art."
But there are still so many levels left undiscussed about this project. By not directly taking the first photograph, Yorty trims back his role as the artist and takes on a bit of the role of curator or critic. By doing so, we feel a little closer to him and more able to join him in looking over the work of others, we become peers whose reactions become as relevant as his. Yorty doesn't ever tell us what he thinks about the pieces, so part of our reaction includes a search to find clues or patterns to get at that, to understand how he came to begin each project and why he chose to include each particular photo. Part of the success of the work is that Yorty remains so indecipherable through it. The extreme quantity of photos aids his transparency, since the more we see, the less clear any pattern becomes.
Commenting on our observations, Yorty said: "I'm drawn to what is already there and how I might be able to use that. The world is filled with so many photographs that one only needs to gather and collect to make meaning. I use a camera for my work as well, but I think there is something different about collecting photographs that already exist. They seem to have more possibilities for measuring the cultural climate of a specific time and place."


Bean Bags (2010) consists of 9 ultrachrome prints sized 24"x32". Yorty "snagged" hundreds of digital photographs from Craigslist ads which were selling used bean bag chairs. Nine were selected and then printed and framed for exhibition. Turning to Craigslist, Yorty's boldness inspires and amuses us.

When asked whether there are any legal concerns to his Craigslist and Google-based pieces, Yorty said: "I don't think so. I don't worry about it. I'm not making money with any of my work. If I ever do and if lawyers ever knock on my door, I'll deal with it then."
We hope that day never comes. We could hardly help it but Yorty's Bean Bags and the Free Couch Archive project (2008, below) brought out our laughter, as we were unaccustomed to seeing such everyday, and sometimes almost embarrassing things, displayed as art. We asked Yorty whether that was a specific mood he was going for.
"I'm glad the work makes you laugh," Yorty said generously.
But the work also has the potential to bring up some quite different reactions, including ideas about class: who are the people who own bean bags and who would try to sell them? How much are they asking? Did they find buyers? If we have no idea about the answers to those questions, does that say something about our social standing? If we have a pretty good idea about the answers to those questions does that say something about us? What about the fact of whether we like the series or not? poverty, or of the lack of business sense in many of the sellers, or of a lack of aesthetic sense? These are only some of the questions that this work inspires. 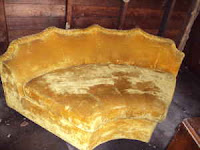 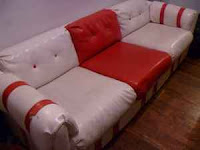 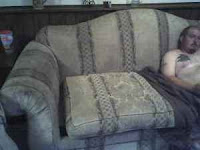 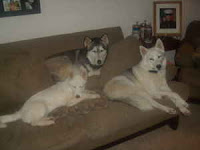 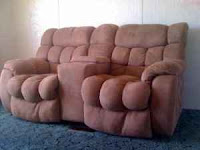 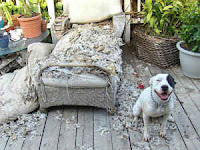 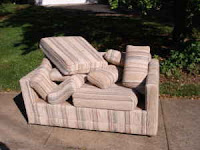 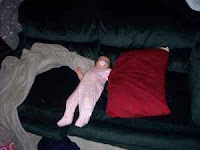 Yorty started the Free Couch Archive in 2008 and continues to add to it. After downloading 33,000 photographs from Craigslist ads which were giving away couches across the United States, he hand-made books and slipcases to display them in. The library now contains 11 volumes, each containing a slip-case filled with 10 handmade booklets that house exactly 300 images each for a total of 3000 images per volume.
"Furniture and its ties to ideas of class and taste is something I think about lot in relationship to my work," said Yorty.
But if you set aside ideas of class, economy and aesthetics, we begin to see how central sitting is to American life. We see all the different uses by others, we think of our own uses, we think of nights when the couches sat unoccupied, or with only ourselves on them, as well as of the times when they were filled with family, pets, friends, business associates, possibly even rivals. In a sense, where we sit is home. And so the reason that we sell, or rather give so many away, may be linked to our fascination with cars. We want bigger and better couches, and so we have to give out the old ones, but we know that few would pay for a couch that is used so we often give them away for free.
"The Free Couch archive was started because I was interested in those photographs' relationship to the history of photography," Yorty told us. "Many other issues are raised within that project like over-consumption and class. I was mainly interested in creating an archive of images that have little to no value in an attempt to find something important. I'm not sure that happened, but people seem to be drawn to the project."
Yorty may not have found importance in the images, but his job as artist was certainly complete when he put them out there for us to do so. The most important thing about this work is that it makes us think about them and our own individual reactions. If it did that for you, that is its strength and that is its justification as art. At least, that's our take.

Yorty's Untitled Collage series is more straightforward in that he assumes the role of artist with its full implications rather than with the collector/curator implications of his previous series. Yorty chose the patterns, the shapes, the positioning, although the patterns were found premade before they were implemented into the pieces.
"The collage work came out of a conscious decision to approach the way I make art more formally," Yorty said. "That work was fun for me to make as I set the conceptual aside and allowed myself to play with form and pattern. I do use found wallpaper (collected at yard sales and thrift stores). The shapes and forms are inspired by the detail drawings of DIY construction projects found in books from the 1950s and 60s."

We asked Yorty to take us through the process of making one of his untitled collages, and to share what materials are involved. He responded:
"I collect the wallpaper and then use it with the woodgrain contact paper to collage drawings I make in Illustrator. The collages are mounted to MDF boards.

We haven't yet seen the work for his MFA thesis exhibition. We asked Yorty for an introduction to it, to which he said:
"This is a question with a long answer that I'm addressing in the writing for my thesis. Basically, the thesis contains a lot of recent collage and sculpture that will work in dialogue with one another. All the work will sit on a wall-to-wall carpet drawing."

About his MFA, we wish him success. And we were curious what benefits he's already gotten or hopes to get from the degree?
"For now, I'm gaining community, knowledge, confidence. Later....I could teach at the college level, though I'm not sure if I'll do that or not. I've also built a whole new community of friends and colleagues that I will stay in touch with that I hope will provide a system of support over the next several years. I think the work I'm making now is much stronger than the work I was making when I entered the program."

When asked whether there are any other projects on his horizon, Yorty responded:
"Yes, I'm involved with the Summer Salon Series at the San Diego Museum of Art. I'll be starting a lot of new series of sculptures, collages and photographs."

And lastly, we asked whether Yorty plans to continue on in San Diego, as well as what his thoughts are on San Diego's art-scene?
"There are a lot of exciting things happening here. I want to see how it all unfolds. There seems to be a lot of growing energy in the art scene in SD. I want to be a part of it so I'm definitely staying in SD for now."

Great to hear! We thank Joe for his time, and wish him good luck once again on the thesis exhibition!

[Joe Yorty's MfA thesis exhibition is now open to the public, with a special closing reception on the 8th. For directions and more info on that, click here. For more information on Joe Yorty, feel free to visit his website at: www.joeyorty.com.]
Date posted: Tuesday, June 05, 2012

-Two new websites:
one about music and random thoughts
ATS Public Diary
one show-casing the greatest movies of all time
The Movie Canon. blogspot.com