Adam Jahnke is the artist we are honored to feature today. After a shaky start in his high school elective photography course, Jahnke has since been busy blossoming into a very powerful photographic communicator, and one that speaks directly to our time. At his current age of 24 years, he has already exhibited nation-wide, had one of his photos auctioned off by MOPA, biked across the country, travelled through Central America, and is currently wrapping up a trip to Australia, all while photographing scenes of intense beauty, excruciating pain, and witty humor.

In 2009, Jahnke put together his first major series, Loathing the Leviathan, which documents the factory farm industry. Through the series, Jahnke reconnects us to the source of our diet which he posits industrialization has separated from its natural and organic roots.

"The work from Loathing the Leviathan is meant to reflect everyone’s collective participation within industrialized agriculture," Jahnke says.

"The work I create is meant to serve as mirror, reflecting the inherent beauty that coincides with the unraveling of civilized society," Jahnke has said. "Focusing on ideas of ecology and domestication of the natural world, paired with the aesthetic visual themes of pattern and repetition, I am able to convey a bizarre feeling of oppression and beauty. My work holds insight into what it means to be civilized and live in a civilized society. Rapid technological advancement has ostracized humans from nature. In the blink of an eye mankind has lost thousands of years of senses acquired in the wilderness that were essential to our own survival as well as the earths. Separated from nature, we have become its enemy, constructing artificial systems of security for our own survival. We are domesticated, afraid and separated from what we once called home for so long."

Jahnke has been making the case that humans have been ruining the great natural wealth all around us, and he's compared that to the biblical story of Adam and Eve getting kicked out of the Garden of Eden. But at the same time, so much of his work shows great beauty even in the midst of great destruction.

When asked whether he sees any hope for humanity, Jahnke says: "It is kind of a funny thought to think paradise can only exist if we are not in it. Maybe this is the catch-22 of human existence. Unable to move backwards yet accelerating forward, humanity looks to technological advancement as a form of pseudo security in an attempt to ward off the conclusion that so many civilizations before ours have inevitably come to. Human extinction might be the only end to the destructiveness, anything is possible, but massive population reduction is a more likely scenario." 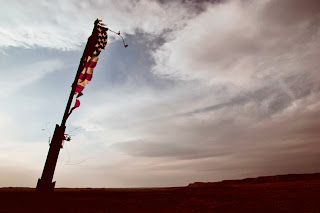 Regarding his preferred camera and as to what role digital manipulation plays in his work, Jahnke says: "I shoot with whatever I can get my hands on. My most recent camera is a 20D that I traded for a painting. My digital manipulation is very minimal, adjusting color balance and white balance, unless a certain artistic concept calls for purposeful heavier alteration."

As unbelievably gripping as his work is, Jahnke's interest in photography almost wasn't:
"Originally, I chose the high school course out of pure curiosity, as well as to fulfill one of my many graduation requirements. I was immediately amazed by the initial cost of the camera and the accompanying supplies. For a number of weeks in the beginning of the class, I had no supplies to call my own and photography class quickly evolved into an hour of absurdity each day. The teacher wanted me out. Right around the time I was to finalize the transfer process to another course my dad surprised me with what was to be my first camera, which became my saving grace, allowing me to finish the class as well as awaken a passion for photography that has spanned far beyond high school."

Even though he has been busy globe-trotting, Jahnke still considers San Diego home.
"And I always will. San Diego’s consciousness will always surprise me; the fact that there is still an ongoing debate over the seals at the children’s pool is mind-blowing. As for San Diego’s appreciation for art, I think it's still developing. I think we as a community are moving beyond the stereotypical coastal art that we are all so accustomed to. San Diego’s music scene has been alive and vibrant for many years now and I think that creative energy is now helping fuel something really special within the visual arts community within SD."
As for his upcoming plans, Jahnke says: "I am currently working on expanding the Loathing the Leviathan series by trying to make the body of work national if not global. I recently pitched the idea to the Kickstarter website and the project was approved, so when I get back home I will be working hard on the mass proposal for the site. I am also prepping to do some limited edition screen prints. Beyond that, I will probably be having another exhibition through Alexander Salazar Fine Art coming up, as well as filling out the usual applications for grant and scholarship funding."
Decades from now, when we look back to get an idea of what kind of people we were at the turn of the 21st century, Jahnke's work will serve as unflinching glimpse of our ways, both admirable and deplorable. If we're still around, that is.